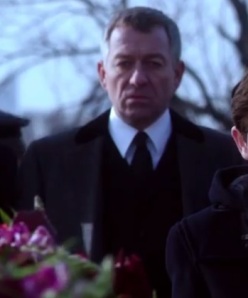 Time today for another character spotted in the Gotham trailer, one of the protagonists: when young Bruce Wayne is attending his parents’ funeral, we can clearly see standing at his back his butler and future father-figure, Alfred Pennyworth, portrayed by Sean Pertwee. Being one of the main characters in the comics’ mythology, Alfred has appeared in almost every adaptation of his master, from the 1943 serial to The Dark Knight trilogy. He didn’t always served Bruce Wayne/Batman: in Birds of Prey, for example, the butler portrayed by Ian Abercrombie aids Bruce’s daughter Helena and her teammates in their crime-fighting in New Gotham. Michael Gough portrayed an elder version of Alfred in the saga started by Tim Burton, while Jeremy Irons is going to bring the character back on the big screen to the upcoming Batman vs. Superman in a slightly younger adaptation. Waiting to see both Pertwee’s and Irons’ portrayals, let’s see who the iconic butler is in the comics. Of course, there are many versions of him on paper too, but this time we’ll only see the last one.

Alfred Thaddeus Crane Pennyworth was born somewhere in England from a man called Jarvis, who worked as a butler. He had a brother, Wilfred, and grew up with him, with no intention of following his father’s footsteps. When he became of age, he joined the Army, trying to get as far as he could from his father and his “servant’s life”. He fought in many conflicts, gaining a lot of experience in both combat and, overall, on-field medicine. He entered the elite regiment known as the British Guards Armoured Division, 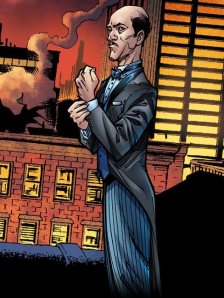 becoming an extremely skilled and expert combatant. When the war was over, he came back to England, where he was hired by the secret services: he entered MI5, and once again he became a multi-decorated agent, a spy who saved his government (and the Western world) more than once, in another kind of war, once fought only in darkness. After all the horrors he had to witness, Alfred finally retired, and decided to follow his youth dream of becoming an actor: oddly enough, his career as a spy had given him a lot of experience in acting, and he soon amazed the audience of the entire Great Britain with his skills. He was at the top of his success, when an American rich man named Thomas Wayne contacted him: Jarvis Pennyworth had died, and on his last will he had asked his son Alfred to take his place as the butler of the Waynes. Just to honor his father’s wish, Alfred agreed to follow Thomas to the Wayne Manor, and started working for him. Despite respecting both Thomas Wayne and his wife Martha, Alfred soon grew tired of a butler’s life, and asked his master to allow him to come back to his life as an actor in England. Thomas agreed, but a few day before his departure, Thomas’ son, Bruce, came back home with a lot of bruises for being beaten by bullies. Alfred taught the child to deal with his tormentors using strategy instead of violence, and Bruce solved his school problem: the morning Alfred was about to leave, the kid asked him to stay almost in tears, and this was more than enough for Alfred to have a second thought and remain with the Waynes.

One night, when his masters had gone to see a movie with Bruce, something terrible happened: a robber, Joe Chill, killed both Thomas and Martha, leaving Bruce an orphan. Following that moment, and realizing he was the closest thing the child had to a 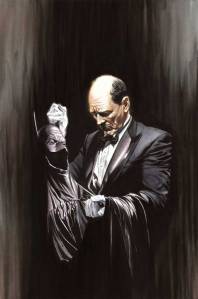 father, Alfred made an official request to become Bruce’s legal guardian. The authorities, however, didn’t want to let a servant take care of Gotham City‘s richest heir: unbeknownst to Alfred himself, Bruce bribed the social service agent to “convince” him to let Alfred be his tutor. From that moment, Alfred raised Bruce the best way he could, being helped in the task by Leslie Thompkins, an old friend of Thomas’ who also became Alfred’s lover for a while. The butler did his best to help Bruce cope with all the pain and the anger he felt from the night his parents died, but could do little but to stay by his side. When Bruce grew up, he decided to go abroad to study, and Alfred was left behind to take care of the Manor. Alfred spent many years alone, waiting for his young master to return, something that he finally did: when he came back, Bruce was a different person, a man hardened by a harsh training and discipline. When he learnt of Bruce’s will to conquer Gotham back from the criminals seizing it, Alfred supported him, and he was the one who patched him up after his first debut as a vigilante. He followed his slow transformation into Batman, and offered him cover anytime somebody (usually Commissioner Gordon) was close to realize Bruce Wayne and Batman were the same person. Despite being constantly worried because of his master’s self-destructive behavior, Alfred stayed loyal to him, and also welcomed in the “family” the orphan Dick Grayson, the first Robin, who he became a father figure for as well. Beyond the military and the stage, Alfred had finally found a reason truly worth fighting and living for.

Alfred Pennyworth is a brilliant and sagacious man, a loyal friend and a dependable employee. Alfred has showed, over the years, many skills, legacy of his eventful past: he’s an expert hand-to-hand combat and a skilled marksman (he’s the only member of the so-called Batman Family who is allowed to carry firearms), an excellent tactician and a wise on-field leader; his medical skills saved the Batman Family more than once, and his acting ones proved useful when he impersonated Bruce Wayne in order to give him an alibi. Truly devoted to Bruce Wayne, Alfred is his friend and adviser, his mentor and teacher, the only man who dares to criticize what the Batman does and the only one the hero actually listens to: supportive, patient and wise, Alfred is the one who made Bruce Wayne be the man he is now.